A new infographic sets out the Scottish Government approach to Community Wealth Building, within the wider frame of a Wellbeing Economy.

A Wellbeing Economy means doing things differently. We need to build an economy that delivers thriving communities, a fair society and is environmentally sustainable. 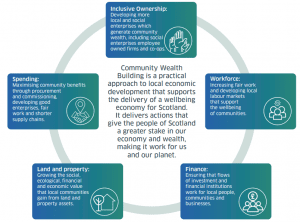 We are growing Community Wealth Building (CWB) in Scotland in different ways, through  locations, sectors and projects.

North Ayrshire Council pioneered CWB in Scotland, and the Ayrshire Growth Deal includes a £3m SG funded project to support implementation. There is also the advancement of CWB in other parts of Scotland and SG is supporting the development of CWB action plans in Tay Cities Region (Fife Council), Glasgow City Region, Clackmannanshire, South of Scotland and Eilean Siar (Western Isles).

Major sectors have roles as anchor institutions through their spending, investment, employment and use of physical assets, and we are seeing the NHS, Universities, Colleges, the housing sector and Police Scotland consider how they can play their part in CWB.

Scotland has a strong track record in delivering projects which link to different aspects of CWB. These can be found all over Scotland, some examples include Midsteeple Quarter in Dumfries, West Harris Community Trust, Scotland’s growing number of employee owned businesses such as the Jerba Campervans in East Lothian, and examples of innovative procurement and commissioning practice such as Perth & Kinross Council’s “Community Benefits Wish List”.

Download Infographics for Community Wealth Building and the Wellbeing Economy below.

Community wealth building (CWB) is a people-centred approach to local economic development, which redirects wealth back into the local economy, …