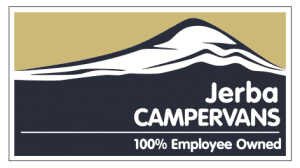 Jerba Campervans is an East Lothian-based business set up by husband and wife team  Simon Poole and Cath Brookes in 2006. Since then, the business has established a reputation as a leading specialist in the luxury campervan conversion market.

As the business developed and grew, Simon and Cath began considering options for securing the long term future of the company – a future which would protect the employees’ jobs and ensure the company values of inclusivity, customer focus and innovation were maintained.

Employee ownership is an ownership model which has a proven track record in creating long term growth and security, and where employees have a real role in determining and sharing in the future of the business – a natural fit for Simon and Cath’s vision for Jerba Campervans’ future.

In January 2018, Simon and Cath – the two sole shareholder – transferred all their shares into a newly formed trust, Jerba Campervans Trust, and the business became 100% employee owned.

The Board of the Jerba Campervans Trust is made up of one employee who is elected by fellow their fellow employees, a second employee who is appointed by Simon and Cath and an outside independent accountant.

In return for transferring all their company shares into the Trust, Simon and Cath agreed a below market valuation for the business. This amount is gradually being paid to them from company profits over a period of years – without the company taking on any financial debt.

As the new business model beds in, the far-reaching benefits are starting to become clear. For the year up to January 2020, the company has reported continued improvements, with a 9% increase in productivity helping to drive a 19% boost in profits, and an increase in the annual employee profit share bonus.

The annual profit share for all employees is paid as a flat amount. Regardless of a person’s role in the company, they receive an identical amount. Fairness is key and an employee’s position is reflected in their salary – a policy which was decided upon by a vote with all employees.

Jerba employees fully engage in the running of the business and take an active role in assessing productivity, knowing that it boosts the business and directly impacts both their long term job security and their annual bonus.

Find out more about Jerba Campervans.

Listen to Simon Poole explain the decision behind the transition to employee ownership and the other options explored at Cooperate Development Scotland’s Employee Ownership Podcast.